He is voiced by Rie Kugimiya.

Yuni is a male black plush kitten, a lot like Mew, Suu, and Peko. He has a white muzzle, and a red star on his ear (as opposed to the yellow stars the others have). He wears a black cloak tied with a red ribbon and a black hat with goggles on top.

Yuni likes making mischief, but is sometimes clumsy. He ends his sentences with "~nyui".

Mew, Suu, Peko, Nene, Rei: They are rivals of Yuni.

Tsugi and Hagi: Tsugi and Hagi are plush kittens created by Yuni when he was lonely. Yuni treasures them a lot, and they also like him very much.

The Queen of Nightmares: Yuni works for the Queen to spread Black Abysses. He respects her a lot, as she is the one who gave him life after a long time not being found by others since he dropped from the sky.

Haruhito Sugiyama: Haruhito is Yuni's partner that is assigned by the Queen. Before he knew about their partnership, Yuni and co. had lived in Haruhito's house for a while. Yuni likes him a lot, and also cares about him. In the last episode of the season, he retired from being Haruhito's partner.

As the rival of the series, it appears he can utilize Black Abyss stones and embed them to what is known as Black Schema to mess up people's dreams. He also has the ability to send people to other dreams with the help of Tsugi and Hagi as seen in Episode 3.

Like Mew, he is a plush kitten from the sky, but was not made by the same fairies who made Mew and co.. After he was dropped to the human world, he was not discovered by anyone and thus was left alone, before the Queen of Nightmare made him become able to move and speak. Out of loneliness, he created Tsugi and Hagi, who started speaking soon after he finished making them.

In Episode 12, he moved from a cardboard house under a bridge to a new house under someone's home, followed by the Queen's instruction. The owner turned out to be Haruhito, and in Episode 24, Yuni and Haruhito officially became partners.

In the last episode of the season, he left Haruhito for a journey, but returned at the beginning of Mix!. 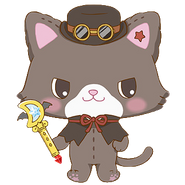 Retrieved from "https://mewkledreamy.fandom.com/wiki/Yuni?oldid=5168"
Community content is available under CC-BY-SA unless otherwise noted.