Female (Tsugi)
Male (Hagi)
Tsugi and Hagi (つぎ＆はぎ) are two of the antagonists of the Mewkledreamy anime, debuting in Episode 3.

They end their sentences with "~tsugi" and "~hagi" respectively.

Yuni: Yuni is the creator of Tsugi and Hagi. They like Yuni very much, and he also treasures them a lot.

The Queen of Nightmare: They work for the Queen to help spread Black Abysses with Yuni.

Haruhito Sugiyama: Haruhito is Yuni's partner that is assigned by the Queen, so they also follow Haruhito. Before he knew about their partnership, Yuni and co. had lived in Haruhito's house for a while.

Tsugi and Hagi follow and obey Yuni, working together to help messing up people's dreams. They were created by Yuni out of loneliness, and they started speaking soon after he finished making them. 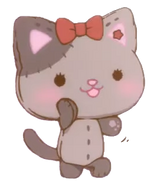 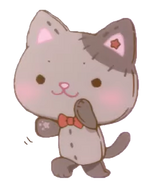 Hagi. 2
Add a photo to this gallery

Add a photo to this gallery
Retrieved from "https://mewkledreamy.fandom.com/wiki/Tsugi_and_Hagi?oldid=5296"
Community content is available under CC-BY-SA unless otherwise noted.