On the way back from the summer training camp, Asahi picks up a stuffed animal that has fallen from the sky at the front door.

The stuffed animal is called "Rei", and for some reason it said "Bonjour!" and started talking like a gentleman. Everywhere Asahi goes, he puts Rei, who follows along, in his bag. Asahi is scared to get caught, even for his childhood friend Yume. On the other hand, Yume and her friends, who haven't finished their summer vacation homework, went to Kotoko's house to do their homework. Yume also noticed that Asahi was acting strange...

Note: All characters are listed in order of their first appearances in the episode. The time they appear is the time from the Japanese dub. 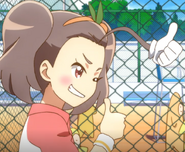 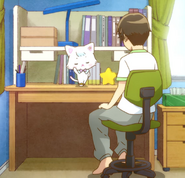 【予告】21話「寛太と健太のユメシンクロ」＜ミュークルドリーミー＞
Add a photo to this gallery

Retrieved from "https://mewkledreamy.fandom.com/wiki/Bonjour!_Rei-kun?oldid=3438"
Community content is available under CC-BY-SA unless otherwise noted.